Dirty Dozen Foods List: Should You Be Buying These 12 Foods Organic? 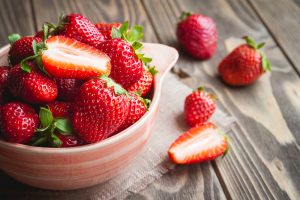 Each year, the Environmental Working Group releases an updated list of “dirty” and “clean” foods. These lists refer to how much pesticide exposure non-organic crops get.

This list is used by many to help prioritize how to grocery shop and where a little money can be saved in the produce aisle.

Each year the Dirty Dozen food list is updated, but there are often many repeats from one year to the next. The foods on this list are ranked with the dirtiest at the top.

But before you read this list and assume you can never eat these foods again, be sure to check the nutritionist-approved recommendations below.

Why do these foods make the list of the dirtiest produce grown in the United States?

According to the Environmental Working Group’s report, each has been analyzed and found to have the most pesticide residue per item. Here’s more detail about the most common repeat offenders on the Dirty Dozen list each year.

Perhaps the most popular fruit in the country, strawberries are consumed year-round thanks to the convenience of modern greenhouses.

The average American eats around eight pounds of strawberries per year — but if those are not organic, they’re also getting a chemical cocktail of toxins that are banned in some countries, like Europe.

Strawberries contain an average of nearly 8 pesticides per sample and that they’re still likely to contain a majority of these even after being picked, rinsed, packed for the store, and rinsed again at home before eating.

Testing from the United States Department of Agriculture revealed that 99 percent of all strawberries contained at least one pesticide and more than 30 percent had 10 or more. The worst sample found 23 different pesticides to be present.

Consumers often wonder if it should be illegal to essentially poison crops and allow them to retain residues when sold for public consumption, but the agricultural laws in the U.S. are some of the weakest in the world.

Because each individual pesticide is found in small amounts, it’s allowable. This doesn’t take into consideration the collective presence of all of the different pesticides found on each individual sample.

Another popular produce item, spinach is a common vegetable choice for Americans because it’s relatively inexpensive and it easily goes into things like smoothies and casserole dishes to “hide” the presence of vegetables.

Most of the pesticides found on spinach in the U.S. fall under categories that are banned in the European Union altogether, for the neurological effects they can exert.

For every spinach sample that was tested, more than 7 pesticides were discovered, with as many as 19 different pesticides found on a single sample.

Much like spinach, kale has become a popular go-to leafy green. Yet it’s just as contaminated as spinach, having jumped several spots higher on the Dirty Dozen list in 2019.

Apples are another extremely popular fruit in the U.S., partly because they’re easy to prepare and kid-friendly. Testing finds that the average non-organic apple contains at least 4 pesticides, with some of them at higher concentrations than other produce items.

Americans consume approximately 10 pounds of raw apples per year, per person. This volume means that the collective toxin exposure over the course of a year could have health consequences, especially in children, who are more vulnerable.

What Happens If You Eat Foods on the Dirty Dozen List?

In the U.S., food insecurity is on the rise, and even middle class Americans can find the burden of purchasing only organic produce to be greater than their budget can bear.

Additionally, in many communities across the United States, organic options for produce are limited at best.

So what is a consumer to do if they can’t find or afford all organic produce? What are the health consequences of eating “dirty” produce?

Googling the subject reveals 139 million different hits, many of them from non-research based sources. Depending on who you ask, non-organic produce will cause devastating health effects. However, experts on the matter conclude the following:

Journal of Toxicology: Swapping organic versions of produce from the Dirty Dozen list doesn’t dramatically improve health or decrease risks. In fact, the difference is negligible in the big picture. (source)

Journal of Environmental Health: The differences between organic and non-organic produce is of “marginal nutritional significance” and pesticides aren’t even the biggest concern identified by this study, but rather, antibiotics.

Choosing organic and pastured animal products improves health more than worrying over organic vs. non-organic produce. Even organic crops use pesticides, and according to these scientists, a pesticide is a pesticide. (source)

Many other experts conclude that, in the big picture, making this the only issue about health vs. disease is pointless. Eating only organic produce won’t erase any potential for pesticide exposure since many organic crops have some level of residues.

Additionally, dairy products, meat, seafood, grains, and other food categories account for a big percentage of overall diet, and unless everything you eat is completely organic, you’re still getting some pesticide exposure.

Beyond that, even if your diet is 100 percent pristine, you still live on a planet that has pollution and environmental exposures to various chemicals. But this doesn’t mean that your future is bleak.

It means that perspective is necessary when framing the discussion of “dirty” or “clean” produce items. There are many ways to protect health, and obsessing over only clean produces and getting no pesticide exposure is impossible.

Is It Better to Skip Produce If You Can’t Buy Organic?

Fruits and vegetables are some of the healthiest foods on the planet. They’re packed with vitamins and minerals, fiber and antioxidants, as well as other cancer-fighting compounds.

A diet rich in fruits and vegetables is said to promote longevity, fight disease, and even help reverse health problems.

But what happens if you eat produce from the “dirty” list? Are you still getting the health benefits?

Absolutely. Many people wonder if they can’t afford to buy organic produce for the items on the dirty dozen list if they’re better off avoiding altogether.

The answer is no. Even with pesticide exposure, fruits and vegetables are still some of the healthiest foods on earth, and avoidance will produce more nutrient deficiencies and risks than eating them.

Besides, many experts conclude that the differences between an all organic produce diet to a non-organic one are negligible in the big picture of all the foods eaten by someone.

The best rule of thumb is to purchase the best quality produce that you can afford. If you can’t always purchase organic, you have a better chance of scoring lower pesticide food by shopping locally, direct from farmers or at a farmer’s market.

Mass-farming operations like those that supply big chain grocery stores tend to use the highest volume of pesticides.

What Is the Best Way to Wash Produce?

Washing produce can also help to decrease pesticide residues on produce before it’s eaten. While this won’t remove all of it, it can decrease the levels and also remove harmful substances like bacteria, that can lead to sickness.

Organic or not, you should always wash produce after purchasing and before eating.

Is it necessary to purchase vegetable and fruit wash sprays or soaks?

Experts say no. You can achieve the same results by thoroughly washing under cold, running water for a minute or two, or by soaking other produce in a diluted solution of white vinegar and water.

However you do it, just be sure that you’re consistently washing your fruits and vegetables before eating or cooking. Even fruits that need peeled, like oranges, should be washed before consumption.

The Environmental Working Group also lists the fruits and vegetables with the least amount of pesticide residues. If you’re concerned about pesticide exposure, you can buy these non-organic produce options with more peace of mind.

Each year, the Environmental Working Group provides an updated list of the Dirty Dozen and Clean Fifteen. While some vegetables and fruits will change spots or be added or removed from the list, it seems a majority of them will stay put.

These resources are just one tool for helping to gauge which foods are the best quality and will serve your health and dietary needs best.

Worrying over pesticide exposure is not the only important issue in the food industry, and in fact, is less concerning than the excessive use of antibiotics and medications in animal foods. You can still get a healthy diet even if you cannot purchase all or even some organic produce.

Buying produce locally, along with any other sustainable products, not only furthers your goal of purchasing the best quality food that you can afford, but also helps to boost the local economy, supports small farmers, and gives you the best nutrient bang for your buck.

Nutrition is about much more than organic versus non-organic produce, so be sure to aim for a well-rounded diet, and eat a rainbow of produce that gives you all of the different nutrients found in fruits and vegetables.

Organic or not, this is one of the best ways to ensure that you’re not deficient in critical nutrients.

This article was fact checked for accuracy by Aimee McNew, MNT, a certified nutritionist. As always, this is not personal medical advice and we recommend that you talk with your doctor.